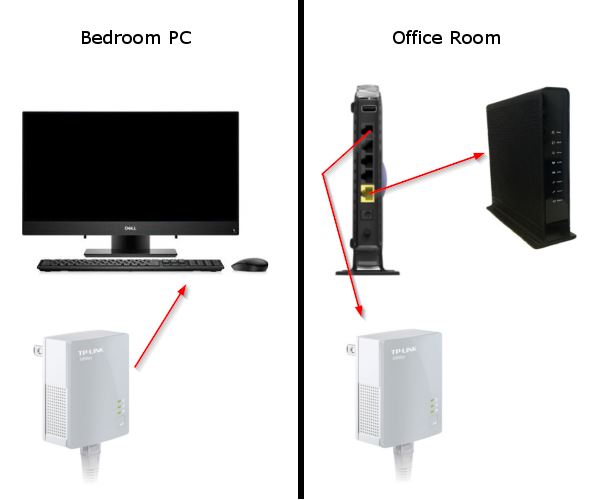 This post contains affiliate links which means that I may receive a commission for purchases made through links in this post. Please see our disclosure for more information.

Going wired with your home network has a ton of advantages over wireless. It’s faster, much more reliable, and works way better with devices in distant rooms. Going wired has one major obstacle to overcome though: how do you get network cables to other rooms? In this article, we’ll take a look at the basics of home networking and a couple of methods to get wired internet to other rooms of your home.

Before you start running cables through your house you need to think about how you will connect everything. There’s some basic hardware you’ll need to wire up all of your devices.

When it comes to home networking, routers are the central piece that connect everything together. These devices connect to your modem (internet), broadcast wireless, and usually have ports in the back for wired network access (among other things).

You probably already have one if you’re using wireless in your home. Take a look at the back of your router and you’ll probably see a number of ports for connecting devices via Ethernet cables. If you only have a small number of devices you wish to connect via wire, the router you already have will almost certainly work.

If you don’t have a router with wired capability, you can usually pick one up for a pretty reasonable price. Just make sure you get one that advertises 1000Mbps (Megabit per second) or 1Gbps (Gigabit per second) ports as you don’t want to end up with a slower router than your internet speed and accidentally create a bottleneck.

The NETGEAR WiFi Router (R6230) is a great choice that delivers dual band wireless and has 4 1Gbps ports for wired devices.

When you think about all of the devices you want to hook up via wire you might find that your router doesn’t have enough ports. This is where another piece of networking hardware comes in called a switch.

Switches are devices that simply direct incoming traffic from multiple ports to a single output port. Think of switches as a way to add additional ports to your router. If you have a router with 4 ports, you can connect a switch to one of those ports and now have 8 or 12. Switches only serve one purpose however; they cannot do the other important jobs your router does so you still need both.

You can find switches for home networking as cheap as $25 but the price varies by brand, number of ports, etc. Make sure you get a switch with speeds matching or better than that of your router (1Gbps or 1000Mbps recommended).

The NETGEAR 5-Port Gigabit Ethernet Unmanaged Switch (GS105NA) is a great starter switch for wiring in a small number of devices.

To setup a switch simply connect the up-link port to one of the switches on your router with an Ethernet cable. Then plug any device you wish to wire up to the network to the switch. If you have an older model switch that lacks an up-link port, you might need to connect to the router with a crossover cable instead. Most modern switches will work with a normal Ethernet cable though.

Hubs are devices that are often confused with switches but they are not the same. These devices handle network traffic entirely different than switches. Hubs work on a broadcast model while switches use a virtual circuit model.

This means that hubs pass network traffic to all devices connected to it while switches only pass data to the destination device.

While they may be cheaper, they can introduce strain on your network and cause other problems. If you’re not sure what you’re doing, go with a cheap switch over a hub.

There are two methods for getting a wired connection to other rooms of your home. The first method we’ll cover is by far the easiest, but unfortunately has some major drawbacks that we’ll discuss below.

The second method uses some specialized hardware that routes internet traffic through the existing electrical wiring in your walls. I know that sounds a little crazy, but it’s actually my preferred method when running cables isn’t an option.

The easiest way to get wired internet access to other rooms in your home is to simply run Ethernet cables from your router to your devices. Having loose cables running through your house isn’t ideal though so what are your options?

Well, they’re not great, but you might be able to run them under your carpet, behind furniture, or tape them up along the baseboards. There’s also some products on the market that can help hide your cables or at least keep them out of the way.

If none of these options will work for you, take a look at the powerline adapter method below.

Another way to get wired internet access in other rooms of your home is through these super handy devices – powerline adapters. These devices plug into your electrical outlets and use the existing electric lines in your home to transmit data – how cool is that?!

They’re not a perfect replacement for a true Ethernet line but they will be faster and more reliable than a wireless connection. I use them in my home and have never considered going back to wireless.

If you need to connect more devices you can simply get additional adapters and add them to the network. They will all transmit data to the adapter connected to your router. You’ll want to make sure that you’re plugging them into an outlet and not a power strip as doing so can cause problems.

These adapters usually come as a kit with two adapters and two Ethernet cables to connect them to your router / device. If you’re not sure where to start we recommend the TP-Link AV600 Powerline Ethernet Adapter.

Your experience may be different though depending on the wiring in your home, so make sure your purchase is refundable if they don’t work out for some reason.