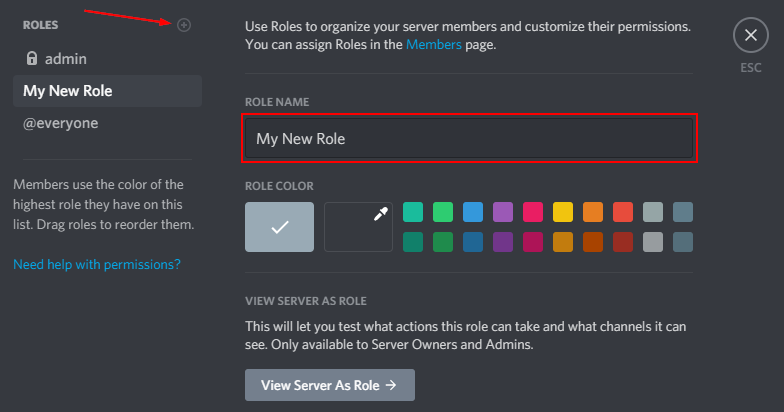 In Discord, roles control who has access to do what on your server. They’re a great way to enforce a hierarchy among your community and make sure that server rules are being followed. Roles have other benefits too like custom colors and mentions.

One way you might use a role is for mentioning a specific group of people. For example, you might create a role for a specific game that only some people on your server play. Rather than mentioning “@everyone”, you could mention only the role so that only those who need the mention get one.

Here’s how to create a Discord role, add members to it, and mention it.

How to Create a Role in Discord

In order to mention a Role in Discord, you first need to have a role to mention! The steps in this section will show you how to create a role in Discord, but if you already have one created you can skip to the section below.

First, click the name of your Discord server and select Server Settings in the dropdown menu that appears.

In the Server Settings, select Roles under the name of your server in the menu on the left.

On the Roles page, click the + symbol next to Roles and type in a name for your new role.

If you want anyone in your server to be able to ping this role, click the Toggle next to Allow anyone to @mention this role.

Save your new role by clicking the Save Changes button at the bottom of this screen.

Now that your role is created, you need to give the role to members of your server.

Click Members under User Management in the menu at the left.

For each user you want to be a member of this role, click the + symbol next to their username and select the role from the dropdown that appears.

How to Mention a Role by Name & ID

With your new role created and full of members, you’re ready to start using it to mention everyone assigned it!

The easiest way to mention a role is by name. From any text channel, simply type @(The name of the role), select it, and hit enter.

You can also mention roles by ID. This is useful for programmers who write bots for Discord because if the name of the role changes, the mention still works. Use \@(The name of the role) to get its ID, and then <@&(Role ID)> to mention it.