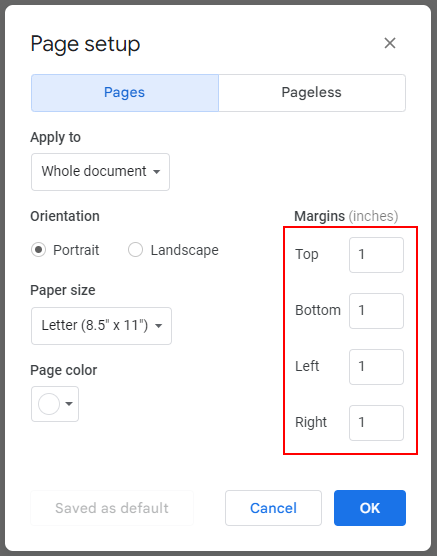 If you’ve ever used Google Docs for long-form writing like essays, you’ve probably noticed the white space on either side of the document. These are called margins, and they’re used to keep text from colliding with document boundaries.

You can set margins to be however big (or small) you like, but Google Docs is also notorious for randomly messing up its own formatting. In this article, we’ll show you how to reset your document’s margins to the default one inch.

What Are the Default Margins in Google Docs?

The default margins for Google Docs are one inch on each side, which is in line with the margin requirements for both the MLA and APA style guides.

If you’re an academic of some sort you’ll be using both of these styles throughout your academic career, and unfortunately, margin size is an important part of both. It’s not uncommon for higher education professors to dock points for incorrect formatting, so it pays to know how to reset them.

How to Reset Margins to Default in Google Docs on PC

If you’re on PC, you can set the Google Docs margins back to the default by going through the File menu in the toolbar. Here’s how, step-by-step:

If you want Google Docs to always use one inch margins for future documents, click the Set as default button. This button will only be available if you’ve previously changed the default margins, however.

Unfortunately, if you’re an Android user, you’re completely unable to reset (or change) the margins from the Google Docs mobile app. At the time of writing, this feature is only available for iPhone/iPad users. If you don’t have an iPhone or iPad, you’ll have to use a PC.

Here’s how to reset margins to default on an iPhone or iPad:

Similar to how you can move bullet points in Google Docs, margins can be moved around at will, and are a useful tool for organizing text in a way that’s visually coherent. Outside of that, margins are an important part of both the MLA and APA formats.

It’s not uncommon for university or graduate-level professors to completely reject papers that don’t strictly adhere to these formats, so it pays to know how to reset them at a moment’s notice.