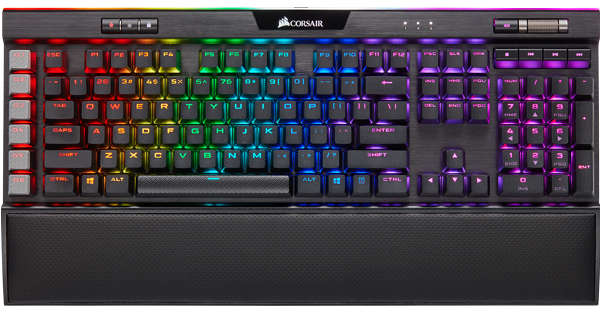 It’s time to replace your old keyboard but you’re not sure whether to stick with a membrane keyboard or switch to a mechanical one. The mechanical vs membrane keyboards is a topic full of differing opinions and things to consider. This is especially true if you’re an every day user of your computer. You don’t want to jump in too quickly and end up with something that doesn’t feel right. Use our guide below to find out which is best for you.

What is a Membrane Keyboard?

A membrane keyboard is the most common type of keyboard, and is what you’re probably most familiar with. If you work in any kind of office environment then the keyboard you use is most likely a membrane one.

These keyboards use a thin flexible layer that sits under the keys and detects when a key is pressed by completing circuits.

This clever design allows these keyboards to be cheap to manufacture, lightweight, and quieter than their mechanical counterparts. While clever, this design does have some drawbacks that we’ll cover below.

One of the major downsides of membrane keyboards is their handling of key rollover. Key rollover is the ability to press multiple keys simultaneously while still being registered by the computer. This is also sometimes referred to as anti-ghosting.

Membrane keyboards often implement some form of anti-ghosting or 3-key rollover but only on certain keys like WASD. Full N-Key rollover (all keys at once) or 6-Key rollover are commonly seen on mechanical keyboards.

This usually isn’t a problem for casual users, but is definitely something to consider for gamers and avid typists. Gamers specifically need a keyboard with high key rollover because of the numerous key combinations used in games. This can leave someone at a severe disadvantage over other players.

Another downside to membrane keyboards is that they’re very difficult to clean. Over time residue from your fingers, crumbs, and other things can slip behind and in between the keys. Cleaning this up is no easy task and usually involves removing screws, the keys themselves, and the actual plastic membrane. Even if you successfully take everything apart you’ll be lucky to have supported keys like the space bar working after you put it all together again. At the price of these keyboards, you’re better off just replacing them entirely.

What is a Mechanical Keyboard?

Mechanical keyboards provide a much different experience than membrane ones. Each key on a mechanical keyboard is an individual spring-loaded switch. These switches help create a unique feel and often times have a distinct “click” when pressed.

This feeling, or sometimes “click” sound, is meant to act as a feedback system of sorts that informs the user when a key is actuated (meaning it’s been registered). This feedback is known as a tactile response and helps the user know when they can continue to the next key. Many switch types also actuate before being pressed all the way down. This allows for speedy typing as less force is required to activate the key.

Mechanical keyboards also lend themselves to much better customization. They can be tactile or linear, have different actuation points, create a click noise or not, and even have their keys replaced.

Mechanical keyboards come in different flavors when it comes to feel. Those physical switches we mentioned earlier are designed for different preferences and are usually color coded. There’s a lot of different switch types but the most common ones are blue, red, and brown.

Blue switches are known as “clicky switches”. They are tactile and the loudest of the three as they make a clear “click” sound when pressed. They’re best for people who like the sound they make and want a tactile response.

Red switches are, in my opinion, the most similar to membrane keyboards. They’re linear instead of tactile and are much quieter than the blue switches. They’re best for people who enjoy gaming or don’t want the tactile feedback provided by the other switches.

Brown switches are the midway point between red and blue. They’re tactile but don’t have the “click” sound that blue switches do. Best for those that like the tactile feel but prefer the quietness of the red switches.

It’s a good idea to try out some mechanical keyboards with different switch types before you decide which one’s for you.

Switch testers are small sampler kits with various dummy switch types so you can feel each switch type. They come with all kinds of different switch types or just a few of the common ones.

You could also just make a trip to a local Best Buy or other tech retailer and try out their displays.

When compared to cleaning a membrane keyboard, mechanical keyboard cleaning is a breeze. You won’t have to unscrew anything or remove any kind of internal pieces. Simply remove the keys, clean the keyboard plate and the keys themselves, and pop them back on. This video demonstrates just how easy this process is with a mechanical keyboard.

Mechanical vs. Membrane Keyboards: Which is Best for you?

When comparing mechanical vs. membrane keyboards, people often wonder which is best for them. The answer to this question really comes down to your personal preferences.

If you’re someone who types often and likes to feel a response to each individual key press, mechanical is probably the better option. If you’re into gaming and are constantly being tripped up by keyboard ghosting, mechanical might also be for you.

For those who only occasionally login to their computer to answer emails or check up on social media – unless you really like the feel of mechanical – membrane will probably work just fine.

Hopefully this comparison has been able to help you make a better informed decision.